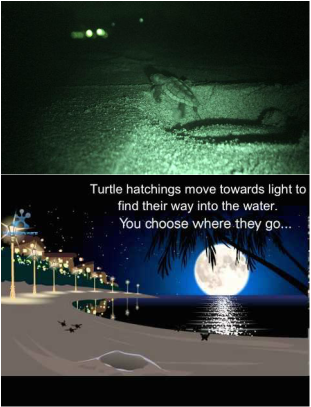 Light pollution has profound negative impact on survival of hatchlings. Sea turtle babies follow the artificial lights and miss the sea, going to die on the following day.
Habitat Loss and Degradation

Coastal development has directly led to the destruction of turtle nesting beaches. ﻿Artificial ﻿beachfront lights from roads, buildings, vehicles and other sources threatens newly hatched sea turtles because hatchlings are easily attracted by lights and artificial lights lure them away from the sea. Disoriented hatchlings can be trapped by vegetation or beach debris. The results of disorientation are often fatal because as hatchlings head toward lights, their exposure to predators and the likelihood of dehydration are greatly increased. In Florida, many hatchlings are frequently found dead on nearby roadways and in parking lots after being struck by vehicles (Conservation Plan for Hawksbill Turtle, 1993). Not only artificial lights, other remarkable achievements of coastal development such as sea walls and jetties, traffic and seaside buildings also threaten sea turtles. These constructions change long-shore drift patterns and thus cause erosion of the sand or destruction of entire sections of beach, making it nearly impossible for female turtles to dig nests and hatchlings to return back to the sea (WWF). Hawksbills around shallow healthy coral reefs and help maintain the health of coral reefs by removing prey such as sponges from the reef's surface. However, coral reefs are now among the world's most endangered marine ecosystems. Climate change and pollution have led to massive coral bleaching events, bring permanent damage to local habitats and causing the Hawksbills population to decline as a consequence (Wild Conservation Society) .

Left: Traditional Japanese tortoiseshell work. Right: illegal sale of marine turtles in Hainan, China. (photo: Xu Ling/TRAFFIC)
Wildlife Trade
Hawksbill turtles are particularly threatened by wildlife trade. The total amount of illegal capture of hawksbill is not known, but it is believed to be a major problem. The increasing demand of souvenirs made from Hawksbill turtle body parts, especially shells, in Japan and China causes the species decreasing population in the source countries like Indonesia, Malaysia, and the Philippines, where have the major population of Hawksbills. Japan is the largest importer among all countries. From 1950 to 1992, nearly two million hawksbills were killed for Japanese bekko (tortoiseshell) trade for jewelry and ornaments alone (The Tortoiseshell Trade, Sea Turtle Conservation Newsletter, 2007). 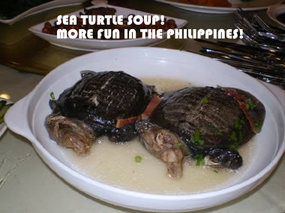 Sea turtle soup loved by Filipinos.
In many costal communities, especially in Central America and Asia, Hawksbills and other sea turtles are considered as a food source (Sam Settle, 1995). During the nesting season, hunters often walk on the beaches at night to look for nesting females. They often wait until the female turtle finishes laying her eggs to kill her so that they can take both the eggs and the meat away. In some countries in Latin America, people see sea turtle eggs as an aphrodisiac and energizing protein (Threats from harvest for consumption, Sea Turtle Conservancy). Some consume sea turtle meat for religious reason. For example in Mexico during the week celebrating Easter, as many as 5,000 turtles are consumed in this region alone by thousands of inland residents gathered in Pacific coastal communities. Even later until the sea turtles were internationally recognized as endangered in 1970s, their meat was still used to prepare turtle soup in some countries, as a local feature(Threats from harvest for consumption, Sea Turtle Conservancy).Today only a few large populations (proximate 500-1000 females nesting annually) can still be found in the Indo-Pacific and Atlantic Oceans (Marydele Donnelly & Dr. Jeanne A. Mortimer, 2007). 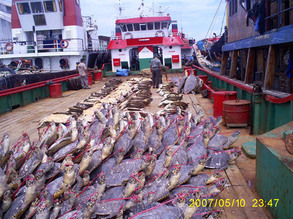 In Kalimantan, Indonesia, authorities seized a Chinese boat with 397 sea turtles aboard. All turtles were dead. (www.turlte-foundation.org)
Poaching of Hawksbill turtles is very common. In May, 2007 in Kalimantan, Indonesia, authorities discovered and stopped a Chinese fishing boat with 397 rare sea turtles aboard. All of them were dead and had been treated with formalin. On the boat there were 296 Hawksbill turtles (endangered), 90 Green turtles (endangered) and 1 Olive Ridley turtle (endangered). These turtles are poached for their shells, for decorative items and meat, which is believed in many Asian cultures to have medicinal value and can bring good luck (blog.marinebil.org). According to police, penalties are about 289,813 dollars fine for the captain and a 100,000 dollars fine for each of the crew, or up to five years in jail for failure to pay. (Malaysia arrests more Chinese nationals for turtle poaching,Yahoo News). 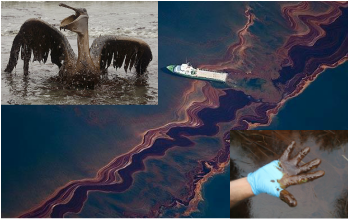 
The Gulf of Mexico is the home to five of the world’s seven sea turtle species: green, loggerhead, hawksbill, leatherback, and kemp’s ridley turtles (Gulf Oil Spill: Effects on Wildlife and Habitats, New England Aquarium). The 2010 Gulf of Mexico Oil Spill is recognized as the worst oil in U.S. history because it is totally a wildlife disaster (The Oil Portal Team, 2010). In total, researchers found that the oil spill has likely harmed or killed approximately 82,000 birds of 102 species, 6,165 sea turtles, up to 25,900 marine mammals, including dolphins and whales, and unknown number of fishes, crabs, oysters, corals and many other sea life (NOAA & A Deadly Toll, 2011, Center for Biological Diversity). 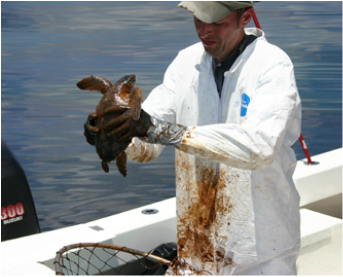 2010 Gulf of Mexico Oil Spill: Sea Turtles, Dolphins, and Whales/NOAA,
Studies have noted that sea turtles do not instinctively avoid oil slicks, putting them at greater risk for exposure when they surface for air (Oil Spill Impacts on Sea Turtles,National Wildlife Federation).When sea turtles swim in oil-covered water, they can breathe in the oil vapors and residues, which can get into their lungs and cause major respiratory problems. Oil can also get into the their eyes，potentially causing damage to vision. If oil gets into sea turtles' mouths and they ingest it, it can potentially damage their internal organs. Oil also threatens sea turtle hatchlings. If the eggs are covered with oil, hatchlings would undergo an more intense struggle in order to break through the leathery eggshell and fail to break through the eggshell would cause them to die inside the eggshell, just before the journey begins. 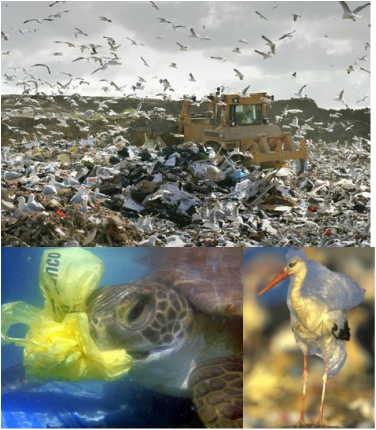 A few facts about plastic bags: 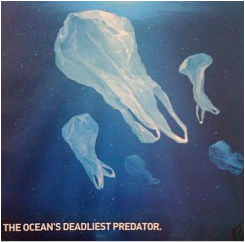 You see the difference, a turtle does not.
It's much more easier for plastic bags to enter the ocean than we think and there are many ways for them to get to the ocean. They can be washed out from the streets and beaches, travels through storm drains into streams and rivers or flies away from landfills into the sea. Because sea turtles cannot distinguish between floating jellyfish, a main component of their diet, and floating translucent plastic bags, thousands of sea turtles accidentally swallow these indigestible plastic bags as food. These nonnutritive plastic bags will wrap around their intestines and make them feel full. Ultimately they will die of disease like intestinal hemorrhage，intestinal cancer, malnutrition or toxic chemical remnants (Threats to sea turtles,Sea Turtle Conservancy) .

Balazs (1985) first to examine the widespread effects and impacts of marine debris on sea turtles. He summarized published cases of the ingestion of debris by Hawksbills and reported that 88.9 % of the articles covered plastic bags, plastic and Styrofoam particles, and tar. Among all sea turtles investigated, 69% of immature turtles ingested debris, whereas 31% of adult turtles ingested debris (Qamar Schuyler, 2012).Carr and Stancyk (1975) reported many plastic and man-made litters were found in the stomachs of Hawksbills from Costa Rica.